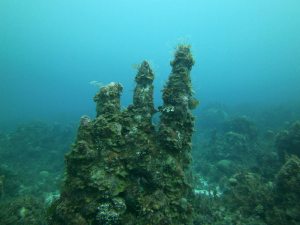 Imagine walking through an ancient Mayan city and picturing what the civilization was like when it thrived. That is what it is like for me when I dive on a reef that once was a kingdom of diversity. I picture what it would have looked like as I swim around the underwater ruins of the fallen coral castles. Like the jungle reclaiming the old pyramid stones that once housed an entire culture, the algae overgrows the skeletons of century old coral titans. It is here, among the engulfing algae that we find a glimpse of hope for rebuilding the coral reef ecosystem in Jamaica.

Once again I am in Discovery Bay. It has been one year since I first dove Dancing Lady Reef, off shore from the Discovery Bay Marine Lab. Last year Professor Phil Dustan and I came to find hi 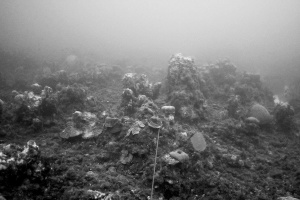 s old study site from 1973 and resurvey the transect he used for his PhD Thesis. In our work we were able to find

exact corals he had sampled and replicate photos that he had taken. The shocking before and after shots we took of Dancing Lady Reef had us in disbelief. We printed them up and showed the scientists at the Lab who were equally surprised. We took the photos to the fisherman’s council, the bars, the market and everyone we showed, was stunned to see what had happened to their reef. That was when we came up with the idea of the Sea Center. It would incorporate Eco-tourism and breath new economic stability into this town. As it stands,

Discovery Bay is the largest port in the country for Bauxite, the countries most profitable natural

recourse. The Naranda Company extracts the ore from the mountains, as massive ships from Japan, Australia and U.S. come into Discovery Bay to load it.

This process a long with coastal development, over fishing, hurricane destruction and the die off of the long spine sea urchin (Diadema) has dissolved the reef. Now Bauxite ore is projected to have only 100 years left before it will be exhausted within the country. Once it’s gone, the country and especially Discovery Bay will need a new economic model.

That brings me to present day. Jamaican reefs are in dire straights, the Bauxite company is currently dredging the bay to

accommodate larger ships to enter, and coastal development is creeping up around the outskirts of the town. With all the environmental opposition, Phil and I still have hope that Dancing Lady Reef could be restored. It begins with our current experiment on sea urchins and their ability to consume macro algae at 100 ft.

Currently the long spine sea urchin that died off in 1983 has re-colonized the shallow reefs along the North Coast of Jamaica. These shallow depths are abundant with sea urchins, in addition to baby corals and baby fish. At 90 ft, the fore reef slope of Dancing Lady, you see remnants of diseased corals, some small fish and algae overgrowing the rest of the reef structure. We brought the sea urchins from the shallow reef down to 90 ft and caged them for 3 days in chicken wire pens.

When we released them we saw a new reef sub-strait. A type of sub-strait that was available for corals to colonize. If more sea urchins were brought down to eat the algae on the fore reef slope, and if the corals started to recolonize the exposed sub-strait, we think the the reef could go through self-restoration. We just need to help the biology a little.(What the reef looks like after Urchins have sat on it for 3 days)

This is when the Sea Center gets involved. Discovery Bay locals have an intimate connection to the ocean. Many of them have brothers, fathers and uncles that are fishermen. Most of them enjoy locally caught fish. And they know that the fish that they are eating are getting smaller. If they could adapt their knowledge from fishing to guiding, and had an infrastructure to bring tourists to the reef and re-locate sea urchins, that could generate income in the form of Eco-tourism.

The idea of a Sea Center bloomed last year as Phil gazed upon an old abandon building that used to be the Discovery Bay Marine Lab before is was moved to the other side of the bay. The beach is an ideal place to build a community center run by the

people, for the people. The Sea Center could be a place where kids learn to swim, serve as an internet site, event location,and eventually a place where people come and learn about the Sea. They could come to snorkel, clean baby corals, re-locate urchins, and even learn to dive. The goals would be economic and ecological benefit. If the locals don’t benefit, the reef can’t either.

This type of a plan takes a massive amount of effort and participation. The local population has to want the center and be willing to work to make it happen. So with the recommendation of our driver Shabba, we drafted a petition outlining the concept of the Sea Center with the intention to gather signatures from around the town. 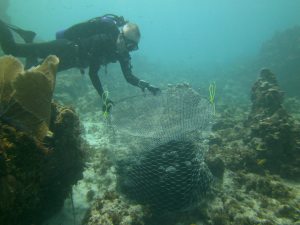 We started with the fisherman’s beach. Looking back I can see why were not received with open arms. Many of the shop owners and fisherman didn’t trust that the land would be given to them, and that the old Discovery Bay Marine Lab would not be accessible to their families. Apparently we are not the first people to come here with a great idea and try to get the towns support. This was a huge eye opener for us, and really helpful too. It gave us a better idea of what steps we need to take to get the peoples support.

So we created a presentation that gave a larger perspective and emphasized how the community would benefit. We took it to the Old Folly community council where it was not only supported but the local town leaders were able to introduce us to the people with economic and social power. We were first invited to the Discovery Bay Community Council meeting where community representatives met with the Naranda Company to propose projects that needed funding. The Naranda representative was very excited about the project and offered to help. We then went to the Community Development Commission (CDC) and met with more community organizers who supported the idea. We had

an exclusive lunch with the Madam Chair of the CDC and the regional Social Development Commissioner (SDC) who wanted to help secure the land from the Red Cross and get funding for building renovation. The SDC representative set up another meeting with the regional Member of Parliament (MP) and some exclusive Representatives that met and discussed land rights and funding opportunities. At the end of this meeting they were already creating a task force team to get the rights to the land and they started to form the first committee board. What started out as a small idea is quickly growing into a big reality for Jamaica.

Discovery Bay is very special, the birth place of modern coral reef ecology. The reef has potential for what we call self-restoration. With some help to relocated sea urchins, and enforce fisheries management, the corals could re-establish and fish could repopulate. This would benefit the community in so many ways. I see Discovery Bay as a place that could be an example of how reef conservation can sustain a community. A true mutualistic relationship; Restore the reef and empower the people.