Raja Ampat is the cradle of marine biodiversity. It lies within the heart of the coral triangle between Papua New Guinea and Sulawesi. The pristine state of the reef in this region correlates with its remoteness. It is very hard to get here!

We stayed on the Southern tip of Gam Island at a small homestay called Daryon village. Our purpose in Raja Ampat was to bring aid to the spreading Crown of Thorns (CoTs) outbreak. CoTs are native to the South Pacific and feed on coral flesh.

When nutrients are introduced into coastal waters, the CoT larvae have a high survival rate and an outbreak follows about 5-7 years after the larvae mature into adults. Nutrients can come from hurricane damage, agriculture runoff, coastal development or human waste.

Once an outbreak has started, eradication is the only way to stop it. We came with 5 CoT kits to see if they could be part of the solution to the outbreak. The CoT kits are simply an Injection syringe, a needle with an extension and a water bladder with

10% acetic acid inside. According to our sources from Japan and Australia, 20ml will kill a CoT. We wanted to test out their effectiveness first hand.

When we arrived, locals told us about an old fish farm where they had seen many CoTs on the reef below.We mounted an effort and invited local dive shops and resorts to come test out the kits. After a tutorial and some dive gear configuration, we headed out on our hunt. We were overwhelmed with the amount of CoTs 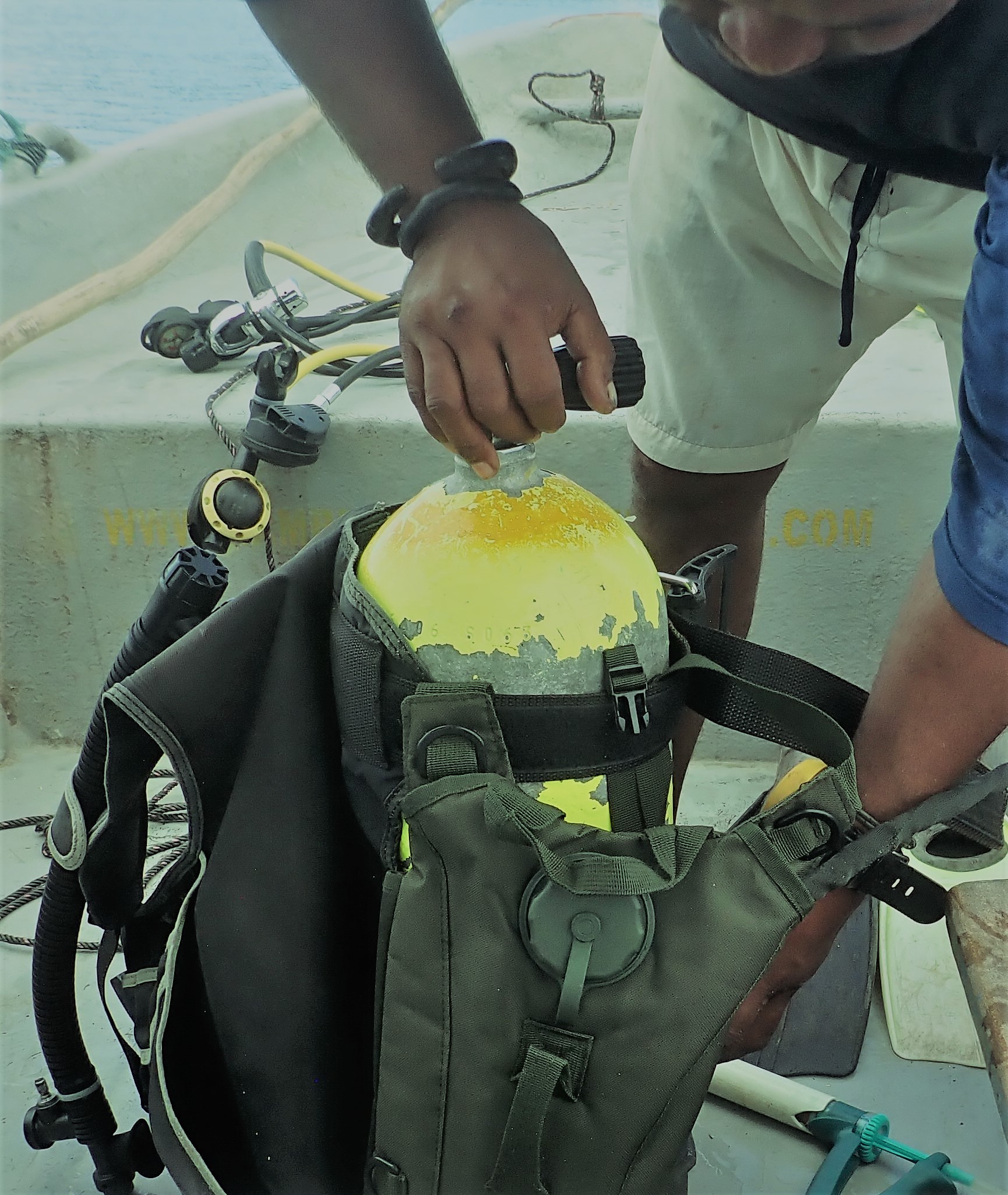 in the area. Some corals had 3-6 CoTs feeding on them at a time. Our local snorkel guide Gelix was a great help with his hook pole. He would pull out the CoTs from their hiding place and we would come along and inject them. After this effort, 4 divers had killed 150 CoTs in 1 hour.

On the small island of Arborek, we met up with the local dive shop operator who had gone out at the same time with 15 local snorkelers and 2 divers. They used the traditional methods of long bamboo tongs and physically removed the COTs and brought them to shore to be dried and then burned. They removed 340 in 2 hours. At the end of the day we had removed close to 500 CoTs off that reef, using a variety of techniques and technologies. We discussed the use of the CoTs kits with our dive guide Haja, Githa from Arborek SCUBA and Eureka from Barefoot Conservation.

They all seemed to find it more efficient than removing them. “Some of the CoTs are tucked way back in the reef and with the Injection kits they could still inject them without harming the corals.” 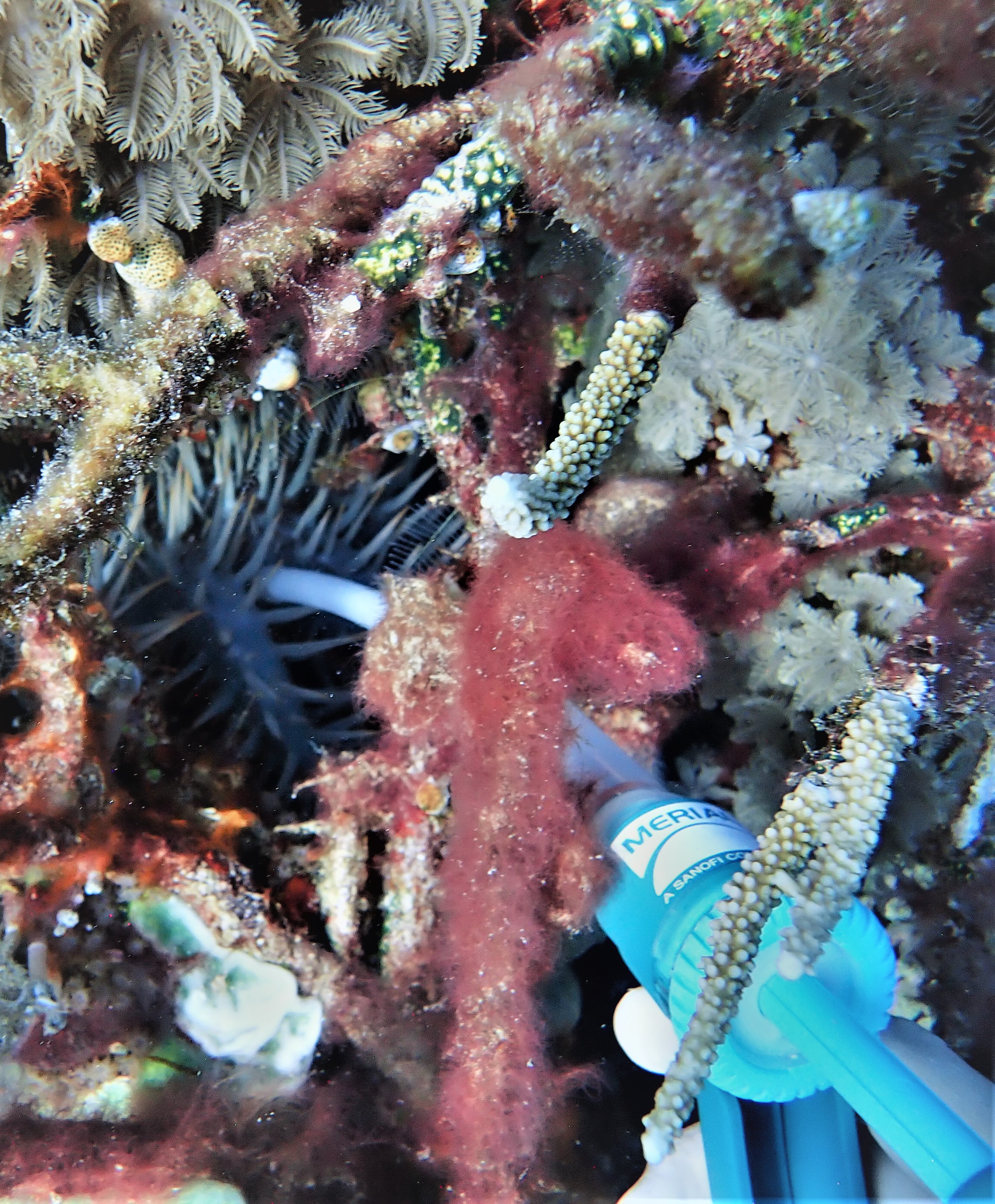 After this trial, we feel that using the kits in combination with the hook poles are an efficient way to kill the CoTs without having to remove them. Studies from outbreaks in Japan have shown that the 10% vinegar solution does not harm animals that may eat the CoTs after they had been injected. Some natural predators are the Tritans Trumpet snail, Bumphead parrotfish and the Emperor trigger fish. I think there is also a benefit to physical removal, not to inundate an area with decomposing CoTs.

In response to this effort we have created a video that can be used as a training aid and a purchasing guide for people that are planning to travel to Raja Ampat and want to bring a kit to leave with their homestay or resort host. Trees To Seas has also received some generous donations to purchase 120 more kits, and we are looking for volunteers to bring them to Raja Ampat on their dive trips for distribution.

These outbreaks can become overwhelming if they go unchecked. With local effort and coordination I think Raja Ampat will successfully reduce the amount of CoTs and restore balance. The next step is to prevent it from happening in the future…